“Always on the outlook for opportunities of action, he [Patrick Ferguson] regarded with attention the aspect of affairs ; and the outbreak of war with the revolted colonies found him intent on the invention of a new species of rifle, with which to counteract the superiority as marksmen of the American backwoodsmen.”

Scottish born Patrick Ferguson invented this advanced breech-loading rifle design in the year 1774 and patented it in 1776 for the British military during a time when the standard military service arm still used a smooth bore and loaded from the muzzle end with a ramming rod. Utilizing a multiple-start thread system with added grease slots, the Ferguson rifle allows the user one turn of the trigger guard in a clockwise motion downwards to open the breech end for loading of powder and ball. The main advantage of this system is the ability to reload from prone position and keep oneself from being exposed, a feat near impossible with a muzzle-loader. With its deep seven-groove rifling as well as the ability to reload from prone, the Ferguson breech-loader made for a lethal weapon of the time.

“Some experiments were tried at Woolwich before Lord Viscount Townshend Lord Amherst Generals Harvey and Desaguliers and a number of other officers with a rifle gun upon a new construction by Capt Ferguson of the 7oth regiment when that gentleman under the disadvantages of a heavy rain and a high wind, performed the following four things, none of which had ever before been accomplished with any other small arm.

1st- he fired during four or five minutes at a target, at two hundred yards distance, at the rate of four shots each minute

2nd- he fired six shots in one minute

3rd- he fired four times per minute, advancing at the same time at the rate of four miles in the hour

4th- he poured a bottle of water into the pan and barrel of the piece when loaded, so as to wet every grain of powder, and in less than half a minute fired with her as well as ever without extracting the ball

He also hit the bull’s eye at 100 yards lying with his back on the ground and notwithstanding the unequalness of the wind and wetness of the weather he only missed the target three times during the whole course of the experiments. The captain has since taken out a patent for the said improvements.” 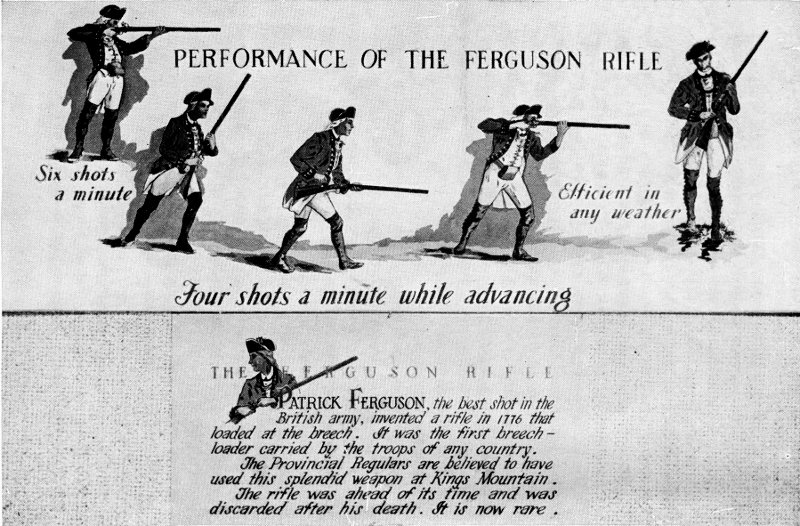 Patrick Ferguson’s demonstration of his rifle

British Army manual for the Ferguson rifle illustrating how to load

Due to the approval of his demonstration using this Durs Egg made rifle and one other, Ferguson was awarded one-hundred Ordnance rifles to his unit where he drew men from numerous other light infantry units and trained them to use his rifle effectively as sharpshooters. Made at a very expensive cost by four different contractors, these British Ordnance rifles would be carried by Ferguson and his men on U.S. soil during the Revolutionary War. The Ordnance rifles are said to have seen use in the Battle of Brandywine on September 11th, 1777, where Patrick Ferguson would receive a wound to his right elbow joint. After the battle, Ferguson would write in his journal that he had a chance to shoot an American Officer on horseback he believed to be George Washington.

“I could have lodged half a dozen balls in or about him, before he was out of my reach, but it was not pleasant to fire at the back of an unoffending individual, who was acquitting himself very coolly of his duty—so I let him alone.”

Patrick Ferguson later lost his life at the Battle of King’s Mountain in South Carolina on October 7th, 1780, where his unit would be surrounded and overwhelmed by Patriots.

The Ferguson rifle is not the first firearm to utilize a breech-loading screw thread system, but is the first to use it successfully in a true military platform. Credit is given to French Isaac De La Chaumette for his patent of a screw thread design in 1721, which Ferguson further improved with added grease slots.

Between the first trial Fergusons made by Durs Egg and the one-hundred Ordnance rifles made, there are approximately one-dozen true Ferguson rifles of either type currently known to be left in existence; this one photographed out of the Institute of Military Technology collection and most others residing in museum collections including the Smithsonian, Morristown National Historical Park, Milwaukee Public Museum, National Army Museum, Kings Mountain National Military Park and overseas in Royal Armouries.

About the Author: Austin Ellis